Born September 17, 1900, Jules White began working in motion pictures in the 1910s, as a child actor, for Pathé Studios. He appears in a small role as a Confederate soldier in the landmark silent feature The Birth of a Nation (1915). By the 1920s his brother Jack White had become a successful comedy producer at Educational Pictures, and Jules worked for him as a film editor. Jules became a director in 1926, specializing in comedies.

In 1930 White and his boyhood friend Zion Myers moved to the Metro-Goldwyn-Mayer studio. They conceived and co-directed M-G-M’s gimmicky Dogville Comedies, which featured trained dogs in satires of recent Hollywood films (like The Dogway Melody and So Quiet on the Canine Front). White and Mye 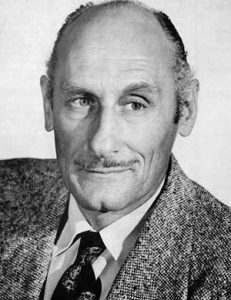 He referred to himself as “The Fourth Stooge,” claiming in a 1982 interview with The LA Times that he had earned the sobriquet because “it was easier to show them (Larry, Curly, and Moe) what to do than to write it down.”

Physical comedy was the norm for White’s short features. Some of his personal favorite gags were used repeatedly over the years: a comedian being arrested always protests, “I’m gonna get myself a cheap lawyer!” Or the star comedian accidentally collides with the villain and apologizes, “Sorry, mister, there was a man chasing me… you’re the man!” White’s most familiar gag is probably the one where an actor is stuck in the posterior by a sharp object, and then yells, “Help, help! I’m losing my mind!”

White came to Columbia from Paramount, where he was an assistant director, and Metro-Goldwyn-Mayer, where he helped to create “The Barkies,” a series of one-reelers that featured talking dogs.