With grace, a voice of an angel, brilliant comedic timing, and a great right hook, actress Christine McIntyre brought an elegance to the 36 Three Stooges film shorts in which she was featured during the course of her acting career. As Jon Solomon points out in his book The Complete Three Stooges, “McIntyre brought gracefully sly characterizations to the Stooge films in the late 1940’s. Like the best film comediennes of the 30’s and 40’s, she had a stunning visage, a shapely figure, and a wry wit. In addition, though, she had the magnificent singing voice immortalized in Micro-Phonies and Squareheads of the Round Table.” 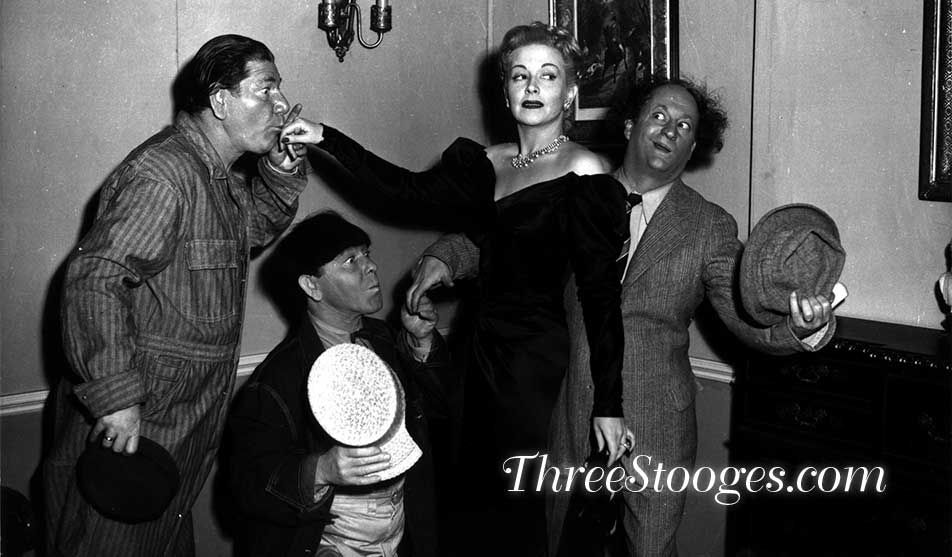 Christine McIntyre poses with The Boys in her final film short, Scheming Schemers

A native of Nogales, Arizona, Christine McIntyre was one of five children. A classically trained singer, McIntyre received a Bachelor of Music degree at Chicago Musical College in 1933. It was here that she developed her operatic soprano voice, which would be put to good use in several Three Stooges films in the 1940s. McIntyre began singing in feature films at RKO Pictures and made her film debut in 1937’s Swing Fever. She then appeared in a series of B-westerns featuring the likes of Ray Corrigan and Buck Jones. She appeared with dark hair in these early roles, and also appeared occasionally in “mainstream” feature films (like 1939’s Blondie Takes a Vacation). She sang songs such as “The Blue Danube” and “Voices of Spring” in a Vienna-themed short Soundies musical film, and her performance was singled out as the best of the inaugural series. Her singing in this soundie may have given the Three Stooges the idea of using “Voices of Spring” in their short film Micro-Phonies.

It was in 1944 that Columbia Pictures producer Hugh McCollum signed Christine McIntyre to a decade-long contract. During her time at Columbia, she appeared in many short subjects starring Shemp Howard, Andy Clyde, Joe Besser, Bert Wheeler, and Hugh Herbert. The Herbert comedy Wife Decoy is actually a showcase for McIntyre, who is the principal character. In this film, she appears as a brunette who dyes her hair blonde. From then on in her screen appearances, she remained a blonde. In all of her Columbia comedies, she demonstrated a capable range, playing charming heroines, scheming villains, and flighty socialites equally well. 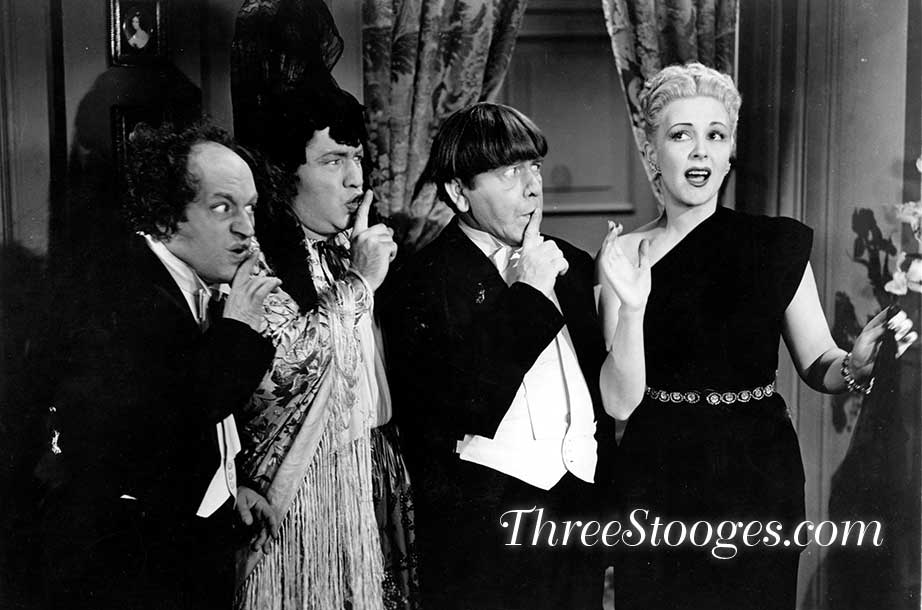 McIntyre in a publicity still with Larry, Curly and Moe from Micro-Phonies

McIntyre’s association with the Three Stooges would become her most memorable. Her debut appearance with the team was in Idle Roomers, followed by a solo Shemp Howard short, Open Season For Saps. McIntyre’s singing voice was featured prominently in 1945’s Micro-Phonies, as she sang both “Voices of Spring” and “Lucia Sextet.” She would again sing “Lucia Sextet” three years later in Squareheads of the Round Table and it’s 1954 remake, Knutzy Knights.

McIntyre also won a feature-film contract with Monogram Pictures. After playing a newspaper publisher in News Hounds, a comedy with The Bowery Boys, she usually played opposite Monogram’s cowboy stars in low-budget Westerns. Her attractive features belied that she was close to 40 years of age at the time, much more mature than the conventional ingenue.

McIntyre married radio personality J. Donald Wilson in 1953. When her contract at Columbia expired in 1954, retired from show business, eventually developing a career in real estate. Columbia continued to use old footage of McIntyre through 1958, which is why she received billing in films made after her retirement.

Bill Cappello who met McIntyre in the 1980’s and published some of his memories on his website, shared some of Christine’s nice words about working with the Three Stooges. She referred to them as professionals in comedy. McIntyre continued, “They were serious about their work, sometimes they would play practical jokes on other people in between filming scenes. One of their favorites was Dudley Dickerson. They thought his reaction to being scared was very funny, and while he would rest in between scenes, one of them would dangle a rubber spider beside him and watch his reaction. Sometimes The Stooges would tell off-color jokes or even use vulgar language, but they always treated me like a lady.”

Some of our favorite Christine McIntyre moments

Three Pests in a Mess (January 19, 1945) credited as secretary. Del Lord wrote fine lines for her, including a fractured nursery rhyme, “I went to the cupboard to get my poor self a bone but when I went there, the cupboard was bare, not even a bottle was there!”

Squareheads of the Roundtable, written by Bernds, showcases quick paced, troubadour-style slapstick, romance, verbal gags, plot developments, a multi-door chase scene, tools, and music. With the stepped-up pace of the short, the song lyrics or the slapstick advance the plot, as in Elaine’s (McIntyre’s) tuneful, “Flee, but flee, the Black Prince is looking iiiiinnn / IIIII will Rai-aise the shade, the lovely shade, when the coast is clear.”

Her performance as Miss Hopkins in Brideless Groom featured a knockabout scene in which she beats voice instructor Shemp Howard into submission.

Director Edward Bernds remembers: “In the story, Shemp had a few hours in which to get married if he wanted to inherit his uncle’s fortune. He called on Christine McIntyre, who mistook him for her cousin Basil and greeted him with hugs and kisses. Then the real cousin phoned and she accused Shemp of kissing her, as it were, under false pretenses. At this point, she was supposed to slap Shemp around. Lady that she was, Chris couldn’t do it right; she dabbed at him daintily, afraid of hurting him. After a couple of bad takes, Shemp pleaded with her. ‘Honey,’ he said, ‘if you want to do me a favor, cut loose and do it right. A lot of half-hearted slaps hurts more than one good one. Give it to me, Chris, and let’s get it over with.’ Chris got up her courage and on the next take, let Shemp have it. ‘It’ wound up as a whole series of slaps—the timing was beautiful; they rang out like pistol shots. Shemp was knocked into a chair, bounced up, met another ringing slap, fell down again, scrambled up, trying to explain, only to get another stinging slap. Then Chris delivered a haymaker—a right that knocked Shemp through the door. When the take was over, Shemp was groggy, really groggy. Chris put her arms around him and apologized tearfully. ‘It’s alright, honey,’ Shemp said painfully. ‘I said you should cut loose and you did. You sure as hell did!”

In Hot Scots, she played Lorna Doone. The film gifted us with the indelible pun uttered by Shemp,  “Hi, Lorna, how ya’ doin’?

McIntyre turned up the slapstick with her physical humor in Studio Stoops. As Dolly Devore, she dangles Shemp out of a window as she and Moe struggle with a rope. She beats up the bad guys by slamming their hands in a door and smashing flower pots over their heads.

Scheming Schemers offers the last footage of the skillful comedienne.

Christine McIntyre is credited in 36 Three Stooges film shorts, 8 of them use stock footage.

Squareheads of the Round Table (1948)

The Three Stooges is a registered trademark of C3 Entertainment, Inc.

The Three Stooges characters, names and all related indicia are trademarks of C3 Entertainment, Inc. ©2017