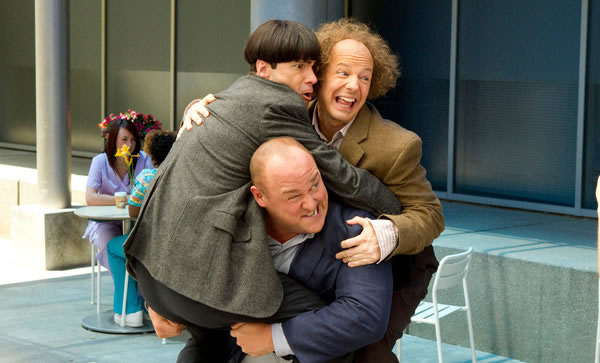 Wry and Subtle Jesting? Not Here, Knucklehead
‘The Three Stooges,’ From Peter and Bobby Farrelly

Every straight man has a stooge – Abbott had Costello, Crosby had Hope – the foil, the fool, the flunky, the goat. But for much of their career, after splitting from a famous straight man, the Three Stooges had only one another to kick and slap around. Beginning in the 1930s these immortal three ran amok for decades in some 200 short films, busting guts and raking in cash. Now, with stupidity a proud national pastime on the boob tube and off, the moment is ripe for a nyuk-nyuk revival, starting with “The Three Stooges: The Movie,” Peter and Bobby Farrelly’s thoroughly enjoyable paean to Moe, Larry and Curly and the art of the eye poke.

Set in the present, the movie is a fictionalized origin story about three sort-of-lovable fools who could be known as Dumb, Dumber and Dumbest, as Peter Farrelly originally pitched the movie. It’s a perfect fit for the Farrellys, who have made a career out of idiocy in comedies like “Kingpin” and have recently stumbled with duds like “The Heartbreak Kid.” Written by the Farrellys and Mike Cerrone, “The Three Stooges” imagines a once-upon-an-orphanage time when three babies are tossed out of a speeding car at the feet of a nun whose name, Sister Mary-Mengele (Larry David in a habit and snarl), announces that the filmmakers won’t be soft-pedaling their shtick.

The nun’s name proves something of a bait and switch because Sister Mary-Mengele turns out to be the most gleefully offensive jape in a movie that’s more sweet than sour. That’s par for the course for the Farrellys, whose vulgarity has always been leavened by their sense of decency and too frequently undermined by their sentimentalism. Even so, while “The Three Stooges” has a few aww moments, as might be expected given that it’s partly set in an orphanage, and although the Farrellys go soft on the Stooges’ relationships, the filmmakers never lose sight of the crude comedy that inspired them. The Stooges’ bonds of brotherhood may be strong, but they’re ties forged by a choreographed roundelay of resonant whacks and other instances of extreme discipline and punishment.

The unabashedly creaky story, divided into “episodes,” follows the Stooges from infancy through childhood to nominal adulthood. By the time they’re grown, physically if not in any other way, Moe (Chris Diamantopoulos), Larry (Sean Hayes) and Curly (Will Sasso) are forced to try and save the orphanage from the bad economy and other calamities. Sent out into the world by the Mother Superior (Jane Lynch) with some cash and no worldly experience, the Stooges land first in an anonymous city and then in a noir intrigue with a femme fatale, Lydia (Sofia Vergara), and her lover, Mac (Craig Bierko). Trouble ensues along with a lion, a bear (oh my), the handsome guy from the Old Spice commercials (Isaiah Mustafa) and, in a sharp, funny stroke, some of the cast from “Jersey Shore.”

The Farrellys don’t overtly mock the “Shore” personalities; there’s no need for them to work that hard. Like some other reality TV stars (the Bravo housewives come to mind), characters like Snooki have assumed the function of a new kind of stooge. In vaudeville the stooge’s traditional role was to give the comic something to work off of, a straight line or a bit of business. The stooge tripped, acted silly, feigned being foolish. The new stooge does pretty much the same thing, the difference being that reality-television celebrities have turned their lives (or some weird approximation of life) into vaudeville. Of course there’s stupid and there’s stupid, and the real Stooges, like the actors playing them in this movie, were performing dumbness, which pretty much seems the point here.

And the three leads in “The Three Stooges” play dumb very well, particularly Mr. Sasso. He beautifully captures Curly’s facial contortions and vocalizations – woo-woo-woo – and, as important, the delicate physicality, the fluttering fingers and flapping feet. Topped with Moe’s bowl cut, Mr. Diamantopoulos bunches his face into a fist and hits his lines like a speed bag (“whatsthemattawithyou?”), while Mr. Hayes, crowned with Larry’s tragically balding Afro and at times sounding like Bert Lahr’s Cowardly Lion, seems to have more to do than the original Stooge ever did. As usual the Farrellys give this movie about as much visual style as you’d find in a Stooges two-reeler, but, as with the original films, you may be too busy watching and laughing at Moe, Larry and Curly to care.

At their best the Farrellys’ movies exult in the stupid and the profane as a means of liberation, including from good taste, even if their characters tend to put away their freak flags at the end, often in the interest of a normalizing romance. Much of the pleasure in “The Three Stooges” comes from watching and hearing (the boings and thumps are terrific) grown men smack each other silly in Rube Goldberg-like formations and without suffering so much as a single black eye, enduring psychological damage or, as bad, being forced to change. Like Wile E. Coyote and those inflatable clowns that bounce back after every punch, the Three Stooges take plenty of hits but keep on coming. They are, as the Farrellys understand, testaments to human resilience, one slap and tickle at a time.

The Three Stooges: The Movie
Opens on Friday nationwide.

This is one dumb movie. In the smartest possible way.