JENNIFER KERRIGAN / STAFF PHOTOGRAPHER George Likar, 50, of Joliet, Ill. He and hundreds of other fans gathered for a Three Stooges convention.

Howard Maurer celebrated her 89th birthday over the weekend at the Three Stooges Convention 2016 at the Radisson Philadelphia Northeast in Trevose. “I was one day off from being born an April Fool,” she cracked to the “woo woos” of family members and devotees.

Joan’s father, Moe Howard, was by some estimations one of the biggest (and most successful) fools of all – dunce captain of the nitwit, slapstick Three Stooges, the longest-running comedy act in film history. The group still is enjoying staying power 86 years after its Hollywood debut in Soup to Nuts.

Nearly 200 Stooges short films (16- to 18-minutes from the 1930s to the 1950s) “are still being watched and enjoyed, all over the world, on TV and the Internet,” said Philadelphia-based Stooges historian and event host Jim Pauley.

Ditto recent homages such as the Farrelly Brothers’ 2012 The Three Stooges which captured a fair amount of the Stooges’ madcap spirit and did well enough at the box office that two more Stooges films are in the works, said Robert Benjamin of C3 Entertainment Inc. He’s a shepherd of the films and a Stooges heir, as stepson of the sixth and last guy to join the troupe, “Curly Joe” DeRita.

“Their style lives on because they pack in more laughs per minute than any other comedian or filmmaker I’ve ever seen,” said 32-year-old fan Trey Luna, who made the trip from Dallas with wife Kristin just to attend the convention. The couple were in decent-sized company; there were several hundred attendees. Many sported T-shirts decorated with their favorite Stoogism (“Stolen from the law offices of Dewey, Cheatem &amp; Howe”) or image – mostly of the South Philadelphia-spawned, Larry Fine; Brooklyn-born “meanie” Moe Howard; cuddliest brother Curly Howard; or his bull-nosed, slot-alternating brother Shemp Howard.

Conventioneers young, old, and in between did the “Curly Shuffle” and made clip-clop sounds down hotel hallways from the speakers’ room to the autograph-signing areas.

Guests could smack at a classic Three Stooges “Whack a Moe” electronic arcade game; buy merchandise, from newly issued comic books to vintage T.S. rings going for $225 apiece; and gawk at even rarer memorabilia locked behind glass, including a “priceless” violin once owned by Fine, who reputedly sawed away with the Philadelphia Orchestra when he was a child known as Louis Feinberg.

Best of all, visitors could take in hours of such classic shorts as Mutts to You (the boys open an automated dog laundry) and Three Missing Links (a gorilla-costumed Curly and a “real” gorilla fall in love).

In the infectious company of other Stooge-philes, everyone laughed loudly at the establishment-mocking stupidity of it all.

“Being here is like reliving one of the best parts of our childhood,” said Gary Rabin, 53, of Montgomery County, on the scene with his lifelong buds Jim Kantor and Alan Soble. “We used to race home after school to watch the Three Stooges on TV,” said Kantor, 66.

Hardly the first celebration of these pratfall clowns held in Philadelphia (or even this hotel), fan-club-only events were run by local devotee Gary Lassin, a fan club president and memorabilia collector whose Stoogeum museum in Spring House is open for touring Thursday afternoons and by appointment. Lassin came to these callings after marrying Larry Fine’s great-niece in 1981.

This weekend was different, though, “the first national gathering open to the public in 18 years,” said lead producer Richard Cohen of Baron Conventions L.L.C. “And this time, we really wanted the focus on the family telling their stories, while they still could.”

Thirty Stooges relations – children, grandchildren and even one great-grandchild – made the schlep. “It’s great for them,” said Lassin. “At home they’re just regular people. Here they’re king and queen for the day. Everybody wants a picture, wants a piece of them.”

Maurer shared mostly happy memories of father Moe (born Moses Horwitz), saying he was “a devoted father, spoiling me like I was a princess, always bringing a present when he returned from a road trip.”

Even when they were cranking out more than a dozen shorts a year, the Stooges continued to work the vaudeville circuit, including the Earle Theater in Philadelphia, to generate added income because of those infamously tough, short-term, contracts offered by Columbia Pictures.

Howard, Maurer’s 81-year-old brother, recalls a father who was self-absorbed. “I used to tell people my father was a meter reader for Pacific Gas &amp; Electric, which seemed like an honest, reasonable job.” But, Paul Howard said, he later “did a 180” – honoring his father in several books and with the nine-hour DVD documentary set, Hey Moe! Hey Dad!

The most craft-conscious observations came from Eric Lamond, Larry Fine’s grandson and marketing director of C3 Entertainment, who got to see his grandfather and Moe Howard rehearse complicated stunts for hours on the back patio “till they got it right [and] wouldn’t injure each other on the set.” 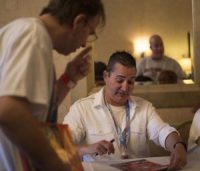 photo by: Jennifer Kerrigan. Bradley Server says people can see the family resemblance between him and grandfather Curly Howard. Server, 50, of Simi Valley, CA signed autographs at the convention.

Server looks a lot like grandfather Curly Howard (a.k.a. Jerome Lester Horwitz), he didn’t know they were related “until I was 8, because my mom had remarried and my stepdad was raising me as his child. I wish I’d gotten to know Curly – he died in 1952, 13 years before I was born. But people do see the family resemblance. I’ve learned to talk like him. And if I mention the connection in a bar, people are buying me drinks for the rest of the night.”