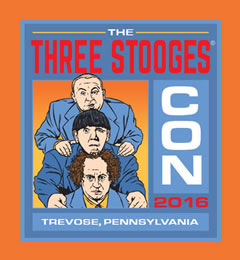 The first major Three Stooges convention in about 17 years took place this past month, with celebrity guests (including Adam West!) and Stooge family members, rooms full of memorabilia for display and sale, and non-stop screening of Stooge films, including some rarities. Attendees from across the country agreed it was well worth the trip to Trevose, PA. If you couldn’t make it this time, here are the highlights of my visit, from Stooges trivia to collectibles tips. Would I meet Adam West? Find out below!

The families of the Stooges were on hand to share their memories, answer questions and meet with fans up close. Moe’s daughter Joan, now 89, has faithfully attended even the smaller annual gatherings in Fort Washington. The families provided great tidbits about the boys, some of which are not already in published sources. The first stop for Stooges history is Moe’s autobiography (my 1977 first ed. shown). Joan and others have also released books.

The Boys looked like ordinary, well-dressed men in their regular lives, and were not recognizable unless you were up close. They sometimes took advantage of this to play pranks. When eating out, Moe would place an incomprehensible order using his famous double-talk to confuse the waitress. She would turn to Larry, saying, “Maybe we’d better start with you,” and he’d answer, “I’ll have the same.”

Larry’s grandson remembers once Moe, Larry and Shemp decided to put up wallpaper themselves. They laid out the paper, and Larry started to apply the glue, and brushed right over Moe’s hand. Moe paused, reached out and whacked Larry with his brush, and before you knew it, they were doing a full fight scene for one seven-year-old audience member. When they settled down and saw the mess, Moe deadpanned, “I know a contractor.”

Emil Sitka’s son Saxon recalled that, in the scene in “The Tooth Will Out” where Emil comes bursting out of Vesuvius Ravioli yelling at the Stooges, he originally started yelling, “You bastards!” and other epithets. When they cut, the director asked incredulously, “What was THAT?” All the curses were audible on film, so the take was unusable and had to be shot again, this time with scripted, family-friendly exclamations.

Shemp’s daughter in law Geri Greenbaum, married to his son Mort for 20 years, was proud that Mort started the first self-service gas station. Girls in t-shirts and shorts would come out on roller skates. If a customer chose to pump his own gas, they’d hand him the pump, skate back to the office and bring back change.

Interestingly, none of the Stooges really had idols that they looked up to, though there were certainly some contemporaries that they admired (Chaplin, Laurel, Gleason). They were too busy working on their craft to indulge in that sort of thinking. They were setting standards instead of following examples.

Some pre-press copies of the first issue of a new Three Stooges comic were available. One of the writers, S.A. Check, was on hand to sign copies. They explained this will be an ongoing, bimonthly series (not a limited edition or one-off), so the second issue will be in June. There are five different covers for the first issue, and there will be multiple covers for future issues as well. The first issue has two new stories and a reprint of “Midway Madness” from Dell Four Color #1170 (1961). The parody ads are also a nice touch.

Adam West, who appeared in the Stooges’ final feature film, “Outlaws is Coming” (1965), though I think he’s also known for something else, was signing photos and memorabilia. I tried to be cool about it, but that wasn’t happening.

Oh, right, now I remember who he is. If you haven’t already, check out the delightfully surreal “Return to the Batcave” DVD from 2003. By the way, Adam West is tremendously funny in real life, and really delights in interacting with the fans. You can see some of his bizarre self-deprecating deadpan in “Return,” which is a reunion special done right.

There are mixed opinions about “Outlaws is Coming.” Many see it as a clever Western spoof, but some may find the humor a bit telegraphed. Keep in mind the 1960s feature films were aimed at child audiences. The Elvis and Beatles references are either clever or strained attempts at staying up-to-date, depending on your point of view. Johnny Ginger, one of two surviving “Outlaws” from the film, was also on hand to chat and sign autographs.

Naturally, Stooge shorts were being screened constantly. I especially enjoyed the rarely shown Shemp solo films. These help you appreciate that much of what we think of as “Stooge humor” was actually a broader genre, and they were just the “best of breed.” Some of the Shemp shorts are online, including the hilarious “Mr. Noisy.” Shemp actually beat the other Stooges to film, appearing in a couple of Fatty Arbuckle films.

Jim Pauley gave a great talk about his investigation into the Hollywood filming locations of the Columbia shorts. The research was impressive, and can’t be replicated by Google Map searches. For example, a checkerboard sidewalk where Curly stood is now a school, fenced in and tarred over, but they got pics while there was still access. They also found the steep staircase where the boys slid down blocks of ice past a cul-de-sac in a quiet residential neighborhood. You can find details in the handsomely printed book, with high-quality paper and photography. This is one of those books well worth having in hard copy.

Without scooping the book, I can share the location of the famous beer barrel scene in “Three Little Beers,” since this was previously known. This was on Echo Park Ave., but different side streets seem to have been used for different shots. The shots with the policeman at the intersection and the final pile-up of barrels with (real-life) onlookers were definitely filmed at Echo Park and Delta St. The building with distinctive double-windows and fire escape still stands today. This is not a cross-shaped intersection, however, so the scenes showing the barrels rolling down the cross intersection must have been shot elsewhere, likely Echo Park and Scott Ave.

Also check out the new Papercutz graphic novels for kids. The stories follow the continuity of the 2012 movie, if “continuity” is even a meaningful concept for the Stooges.