The Three Stooges are considered by many to be the greatest comedy team in the world. They had a long career making shorts and because of the timelessness of their iconic comedy and volume of work (over 190 shorts) we still get to enjoy the short takes of zany antics, impeccable slapstick routines, stellar performances from the supporting players and terrific dialog with some even becoming catchphrases; like “Where’s Your Dignity?.”

In short, we present to you, Short Takes from six shorts that were released over the years in the last part of April arranged by their day of release.

Short Take: How much damage can the masters of mirth, merriment & mayhem accomplish in seventeen minutes? Well, while filming A Plumbing We Will Go they ruin the basement, upstairs bathroom, kitchen, living room, the lawn, and destroy the plumbing, and the electrical, gas, steam and telephone lines!

This classic starts off with The Three Stooges in court, accused of stealing chickens from Mrs. Throttlebottom’s chicken coop. Justice does not prevail, and the Stooges are found innocent. Now free, Moe, Larry, and Curly cause more mischief by fishing for their supper… in a fish tank in front of a pet store. Running from a cop, they steal a plumber’s truck for a getaway, stopping at a mansion where they’re mistaken for the real thing. Claiming they’re “the best plumbers to ever plumb a plum,” it’s not long before mayhem ensues. 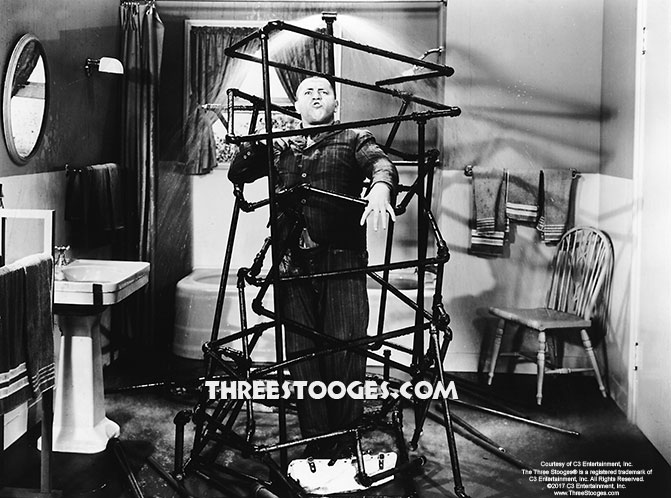 The first production by the Lord/McCollum team and writer Elwood Ullman.  A Plumbing We Will Go features brilliant physicality from isolated Stooges and Dudley Dickerson as the cook, and a surprise, gushing climax from a television set, all helping to make this one of the most memorable comedy films ever made.

Short Take: The Stooges are out-of-work actors who manage to wrangle themselves a job putting on their gag “bullfight” act during a fiesta in Mexico. On the bus trip to Mexico City they meet a beautiful senora named Dolores, and when they run into her jealous husband at the bus stop Dolores mistakenly ends up with their suitcase instead of her own.

The genre known as ‘comedy of manners’ has a long pedigree extending back to Restoration England. Its typical elements – bedroom settings. hidden lovers, duplicitous wives, and jealous husbands – are all found in the bedroom sequences of What’s The Matador?. As a result, there is very little slapstick by the Stooges in this scene. The comic protagonist is the jealous husband, who runs into the wall, puts his head through the door, and gawks at the three different hidden Stooges lovers running out the bedroom door. Harry Burns (1885-1948) who played two ethnic roles in other films, plays the husband – Jose. His wife Delores is played by Suzanne Kaaren who also appeared in Yes, We Have No Bonanza. 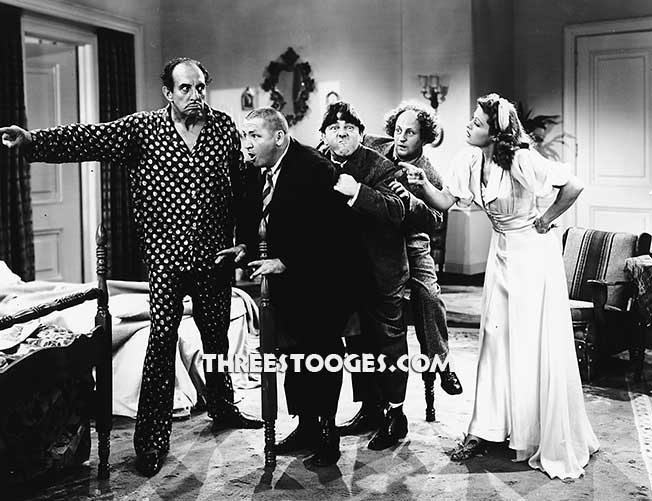 Short Take: The Stooges go west on vacation for Shemp’s health, who has a swollen vein in his leg. At a saloon the Stooges get acquainted with Nell and Shemp begins to tell her about his vein. Doc Barker overhears and thinks Shemp is talking about a gold mine, and plots to steal it by inviting Shemp into a crooked poker game. The Boys learn that Doc Barker stole the Red Dog Saloon from Nell and is forcing her to marry him, otherwise he’ll kill her sweetheart the Arizona Kid. Stooges to the rescue!

Of the dozens of set routines the Stooges developed and varied over the years, the mixology gag was one of the most dependable. the mixing itself always blends verbal and visual comedy, and it usually serves to further the plot by drugging someone, in this case – the villain. Their Ickey-may recipe: Pour Old Homicide whiskey into a bucket, add old beer, molasses, Tabasco, seltzer, two eggs (broken on the forehead) and paint. If you add too much paint, add some paint remover. Shake in a large boot and serve to your worst enemy. 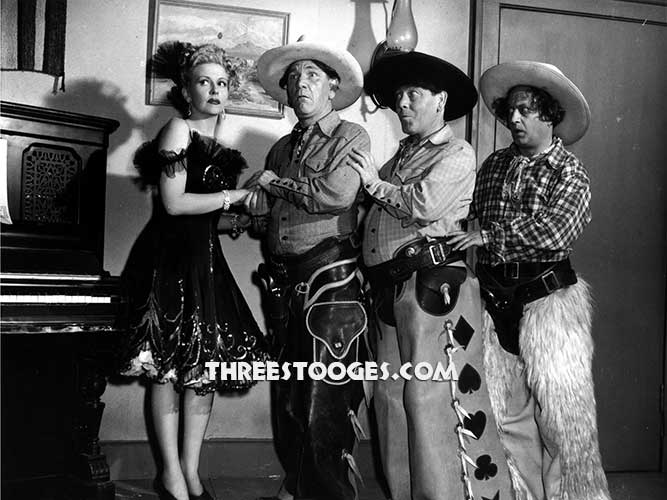 Short Take: Set in the Western town of Dead Man’s Gulch, The Stooges learn the last 6 sheriffs were killed by the villainous Badlands Blackie. He has kidnapped the father of a woman named Nell and Blackie threatens to kill her father unless Nell marries him. With Curly as the new sheriff, and Moe & Larry as his deputies, how can Blackie possibly succeed?

Dick Curtis and Christine McIntyre – as Badlands blackie and Nell – carry the plot of Three Troubledoers. Curtis towers over everyone and delivers on purty Western cliche’ after another. He had played in Westerns since the early 1930’s and ultimately amassed nearly 200 movie credits. 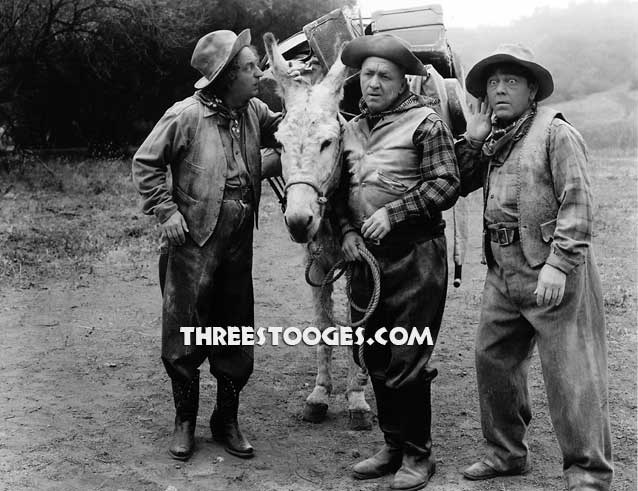 Uncivil Warriors Released April 26, 1935
Cast and Crew: Starring Larry, Moe & Curly. Supporting Players: There were no credited supporting players in this short yet it had one of the largest casts of any short with 19 uncredited cast including Bud Jamison, Phyllis Crane, James C. Morton and Ted Lorch.
Short Take: The Stooges are three Union spies who infiltrate the Confederate headquarters of General Butts. Their mission is to determine the enemy’s positions and armaments, but manage to find the time to flirt with the General’s daughter and her two lovely friends. Before long, the boys find themselves suspected by Major “Bloodhound” Filbert, who has a special skill in uncovering spies.

Demonstrating The Boys talent for delivery comedic dialogue, Writer Felix Adler wrote one of the best three patterns used in any short:

Moe: I wondah if this is the right place Lieutenant?

Larry: I reckon this is the place, Captain. What do you say, Major?

Short Take: WWI has ended and the Stooges have been discharged from the service, but not before they exact some revenge on their Sergeant and beat him up. The years pass and our heroes have become bums. Trying to sponge a meal from a well-to-do man, he confronts them in front of a recruiting station and cons them to go inside for a job. It’s only after signing up that the boys realize they’ve enlisted in the Army, under old Sarge’s command again! Later, assigned to train on a mortar cannon at a naval base, they’re unaware that target practice has been called off… just as the Admiral’s flagship is cruising into port.

Half Shot Shooters is the only Stooges short in which The Boys are themselves the victims ao the bad guys and do not triumph in the end.

Watch The Boys blow stuff up! 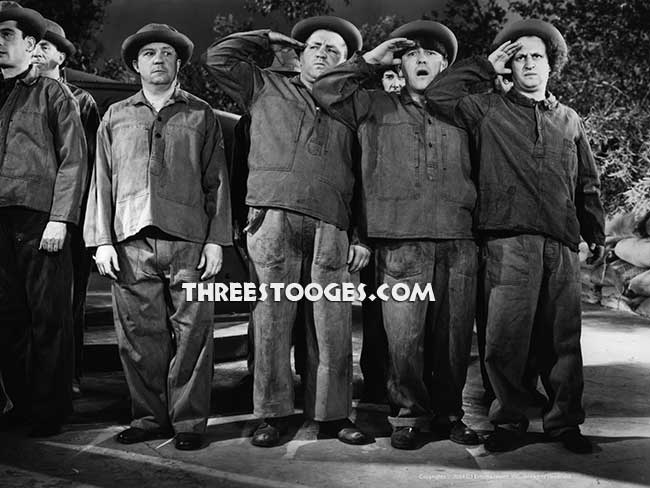 As you can tell from reading this article The Three Stooges were very versatile in the characters they played, the variety of supporting players they worked with and the different plots and dialog that enhanced their unmatched performance as the masters of mirth, merriment and mayhem.