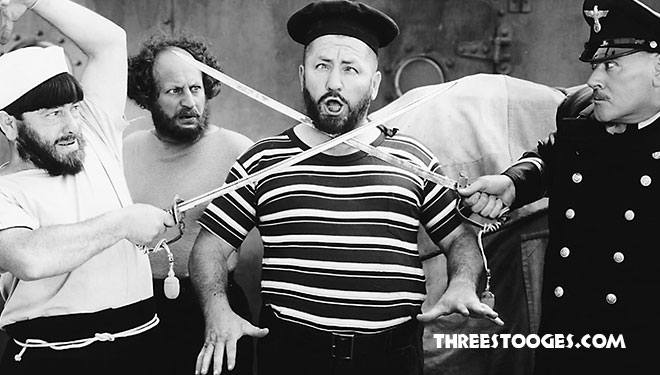 Every story has a beginning, a middle and an end. At least every good story has these elements.  In this installment of Short Takes we are featuring a short from the beginning of May, one from the middle of May and one from the end of May. Will we include all of the May shorts in upcoming installments? Why, Soitenly!

These three shorts cover the month from the 1st to the 28th and there are some significant points that we will point out about these shorts. After all, that’s what these Short Takes articles are all about – to give you some additional information about the masters of mirth, merriment and mayhem and their work.

“I knew you were coming so we baked a cake!”

Short Take: Three Stooges. Three engagement rings. One girl. When all three of The Boys end up in Mabel’s apartment with an engagement ring the mayhem begins. It ends with all three down and out while the gal walks off with the rings. “So long, suckers.”

The Boys and Connie Cezan were the only four actors in the short as all the action is among The Boys in the opening sequences and then between each of them and Connie as Mabel.

The opening sequence is a brilliant 10-minutes of Larry, Moe and Curly cleaning up their apartment using endless gadgetry; the tack gun, the Murphy bed, the magnet, propelling larry by his suspenders and special effects; fast motion for the bed and Larry blowing on the sheet.

Corny Casanovas features new visual humor too.  The first boxing match between Moe and Shemp. The first time one of them gets whammed in the knee (with a fireplace tool, no less). And, the first time Larry hits himself in the head with a phone. 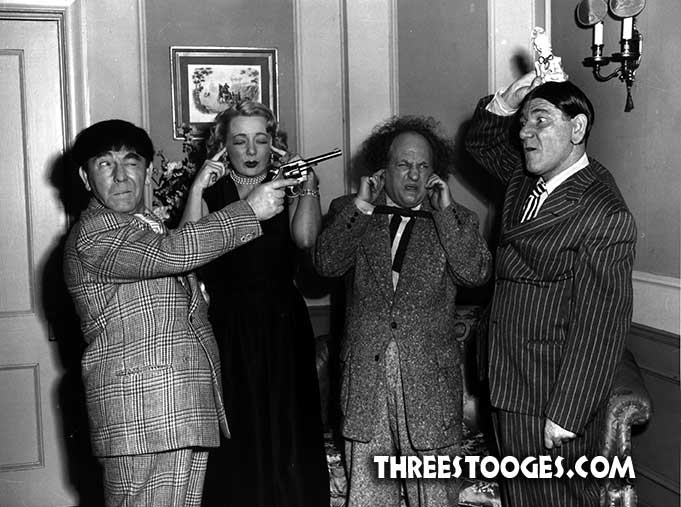 There are some great throwaway lines in this short also.

Larry: I must be cutting against the grain.” (as he accidentally cuts up Moe’s suit coat).

“A hunting we must goeth.”

Short Take: At 19 minutes 27 seconds, Back to the Woods is one of the longest of the Columbia shorts. The Boys are in the early Colonial era in Back To The Woods. They even dress in Pilgrim costume during part of the short. They dance, too! In fact, The Boys and the girls – Faith, Hope & Charity – end their dance sequence with a bit of finger-waving dancing known as the Shag and Susie Q.

The verbal humor in Back to the Woods hits a high note, thanks to screenwriter Andrew Bennison. Being that the location is the American frontier, there are many pseudo-archaic words and phrases: You see-eth, Wouldst, “Giveth them the works,” and “Why does thou not lookest where thou smackest.” Even more great dialogue is used in the literal gag:

Moe: Fire at will!

Curly: Which one is Will?

Among the firsts in this short is banging a rifle on the ground and accidentally shooting down a bird, scooting along a burning rear, and chasing an enemy in a circle, devices that would be used effectively in several more shorts.

The visual humor of the series of signs in the middle of the woods with the warnings, no smoking, no hunting… scram is classic. 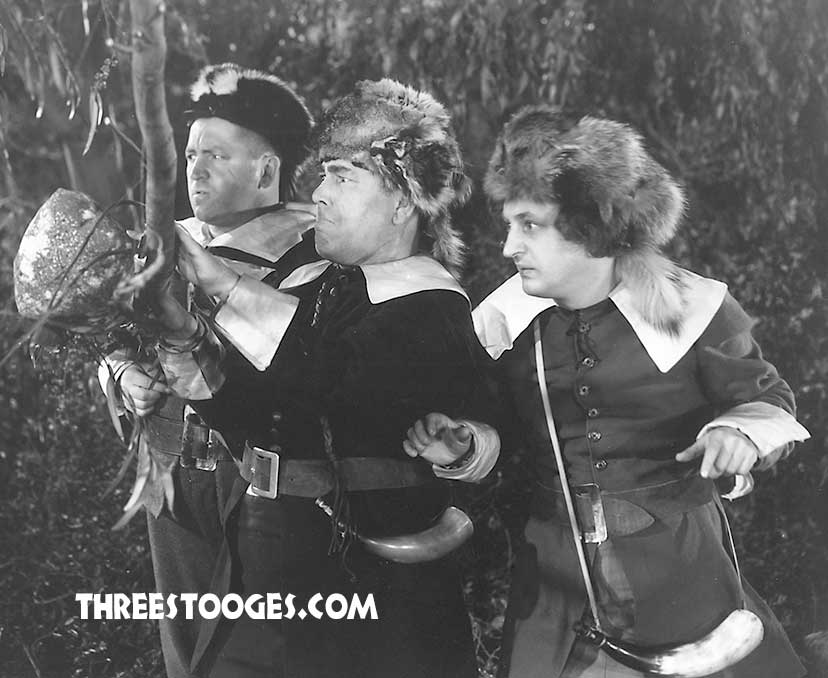 This is an appropriate short to write about as it was made during the height of World War II and May is National Military Appreciation Month.

Short Take: This is the fifth of The Boys World War II films and in this short, they enlist in the Merchant Marines. As in earlier films, they stumble across the enemy, in this case after their ship is sunk and they end up on a Nazi ship.

Back from the Front is a historic film. The Stooges do their part to win the desperate struggle for secure shipping lanes in the North Atlantic. They not only uncover and utterly defeat a Nazi force; they also humiliate them. Heroic acts fit easily into The Stooges’ group persona: for years now they have been handling weapons, confronting thugs and beasts and rescuing helpless victims. Their Modis Operandi may be unconventional, which is where the comedy lies, but The Stooges work very convincingly as heroes who enjoy their triumph and bolster the spirits of theater-going audiences.

The porthole on a ship gag is also used in Dunked in the Deep and Commotion on the Ocean.

Larry, Moe & Curly have very common character names in this short which falls in line with its theme: They portray average Americans doing their best for the war effort. In the short, The Boys prevail over the Nazi forces.

This short, while bringing comic relief to audiences, also was a morale booster as it shows regular guys beating the Nazis. The battle for the North Atlantic was still in doubt when the short was filmed in July 1942. Winning that battle was crucial for the Allies as, realistically, until the Atlantic was cleared of German submarine packs there could be no invasion of Europe.

You may also enjoy: The Three Stooges May Short Takes Part 2