The Boys were very busy in the first week of May with seven shorts released between the 1st and the 7th. These releases spanned from 1934 to 1956, so they were a bit, as Moe would say. ‘Spread Out!’

While we usually write these Short Takes articles chronologically, we’ll start this installment with Woman Haters since it is Columbia Short #1.

“Mr. Chairman, three gentlemen wait without.” “Without what?”

Short Take: This short was one of Columbia’s ‘Musical Novelties.’ The dialogue in the short was all done in rhyme. The basic story: The Boys join the Woman Haters Club. As part of the initiation, each of The Boys receives an eye gouge, administered by Bud Jamison.

This is one of the few shorts were The Boys had named characters: Moe as Tom, Larry as Jim and Curley as Jackie.

This was a one-off for The Boys: Harry Cohn, the head of Columbia, made this with an option for eight more. The success was evident as soon as it was released, so they got down to making not only the next eight but the next 189!

“Any resemblance between the Three Stooges and regular human beings is a dirty shame.”

Short Take: The Boys are once again census takers, but this short all takes place in a single locale, the apartment of Mr. & Mrs. Wycoff, rather than the expansive locales in No Census, No Feeling that ended up in a football stadium. Don’t Throw That Knife is one of two ‘box comedies’ released in May. The gags and bits, however, are many and varied as is the slapstick and among the dialog is this: Moe, to Mrs. Wycoff: “Where were you born, Madam?” Shemp instead answers: “In the hospital. I wanted to be near my mother.” 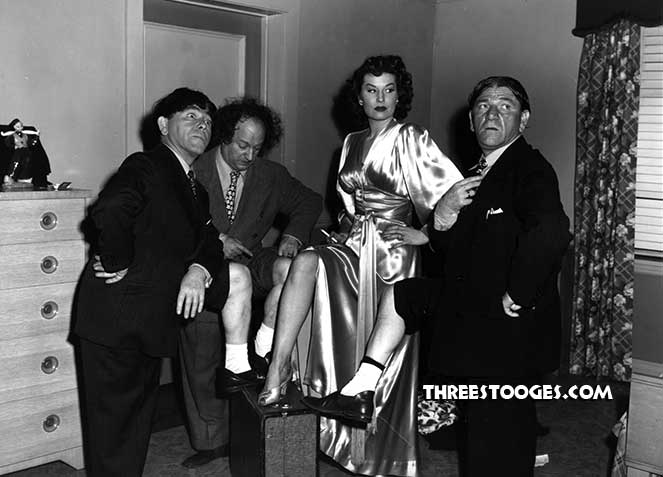 The Three Stooges with Jean Willes

“Miracle Detective Agency: If We Solve Your Crime, It’s A Miracle!”

Short Take: Jules White and Felix Adler reworked the script from 1949’s Who Done It for this short with The Boys again as detectives trying to protect Councilman Goodrich, played by Emil Sitka. A key difference in the two shorts is that in Who Done It there were sequences with radio news. By 1956 the radio serials were replaced by television so in Crimin’ Out Loud the news that affects the story comes from newspapers.

While much of the film is stock footage from Who Done It, among the newly filmed footage this short has this slapstick sequence: Moe offers his fist to Shemp: “See That?” Larry slaps it, so it circles  and bonks Larry and Shemp and gouges Moe. This would be the last slapstick bit filmed by a Howard-Fine-Howard combination as Shemp would pass away In November. 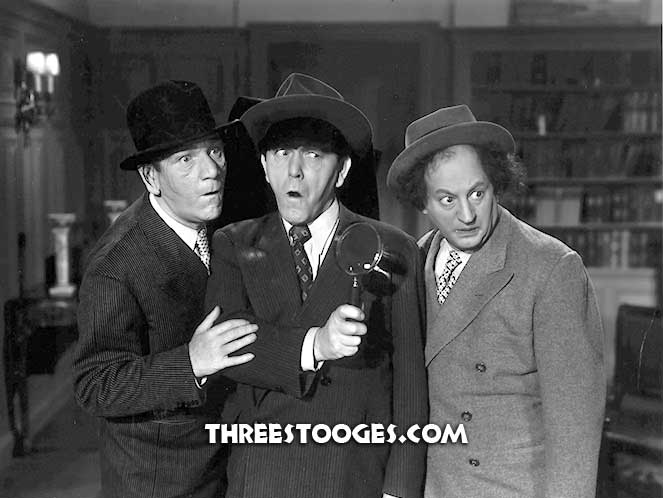 “My romance started on the Rue de Schlemiel in Paris.”

Short Take: This short has a flashback sequence showing The Boys in Europe and how they fell in love during World War II. The flashback sequences show each of them in romantic encounters in Italy, Vienne and Paris. Back from the flashback, The Boys are getting ready to meet up with their girls at the docks who are coming to America to marry them.

The slapstick, including a seltzer fight, and mess The Boys make in this short comes from them drinking too much, one of the few times they actually get inebriated in a short.

While drunk, Larry & Moe think Shemp has died, so they encase his feet in cement so he’ll sink as they plan to take him to the pier and throw him in the ocean. While still in their apartment, they finally realize that he is still alive! To solve their dilemma: The decide to blast with dynamite to get the cement off of Shemp. The resulting blast blows The Boys right to the pier where their fiancés are waiting!

Another instance of The Boys traveling a route to get something accomplished that only The Three Stooges would think up! Nyuk! Nyuk! Nyuk! 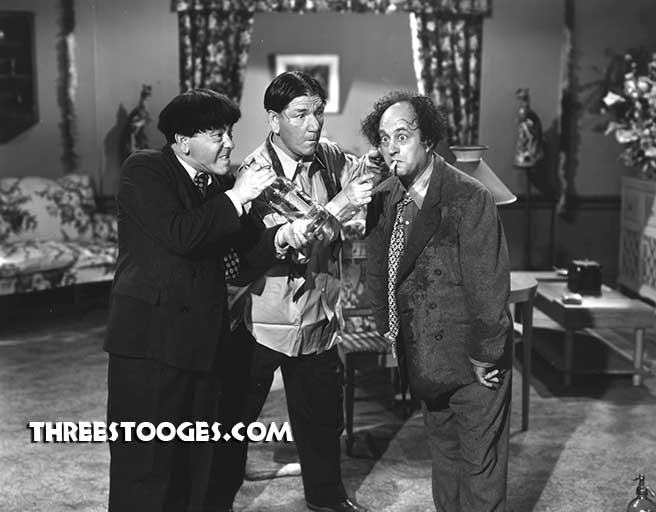 “The great hypnotist Svengarlic — He’ll steal your breath away.”

Short Take: This short has a bit of role reversal as Moe is the foil and the object of several pieces of slapstick shtick from Larry & Shemp and with Larry giving Moe orders. This was a twist that Adler and White decided upon to create a little variety with the inter-Stooge dynamics.

Plot-wise, The Boys are helping their neighbor Mary with an insurance claim, that is bogus, but they don’t realize that. They also fall under the sway of Svengarlic, he puts them in a trance and makes them dance on a flagpole. But in true Stooges fashion, The Boys reveal Mary’s scam and break Svengarlic’s trance so, while the path is a bit odd, The Boys do emerge victorious and right does triumph. 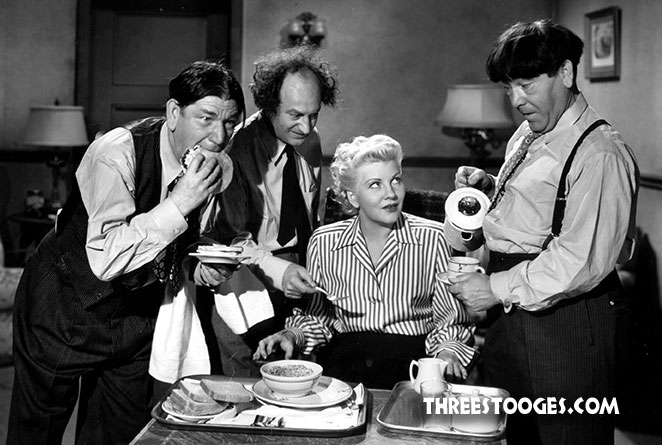 “Idiot! Thou hath made me shoe the wrong mule!”

Short Take: Fiddlers Three is a Stooge fairy tale with the tried and true save the damsel plot. The Boys entertain King Cole, played by Vernon Dent. As usual, The Boys take an odd path, but they do foil the plot of the evil Mergatroyd the Magician, played by Philip Van Zandt and do save the damsel – Princess Alicia played by Virginia Hunter.

There is the device of making some of the dialog sound like ‘olde English’ with variations like scammeth, Larryeth and shaketh. There is a bit of classical literature shown in this short: When The Boys go to the blacksmith shop, there is a note that reads: “gone to rest under the spreading chestnut tree” which is a quote from Henry Wadsworth Longfellow’s “The Village Blacksmith.” 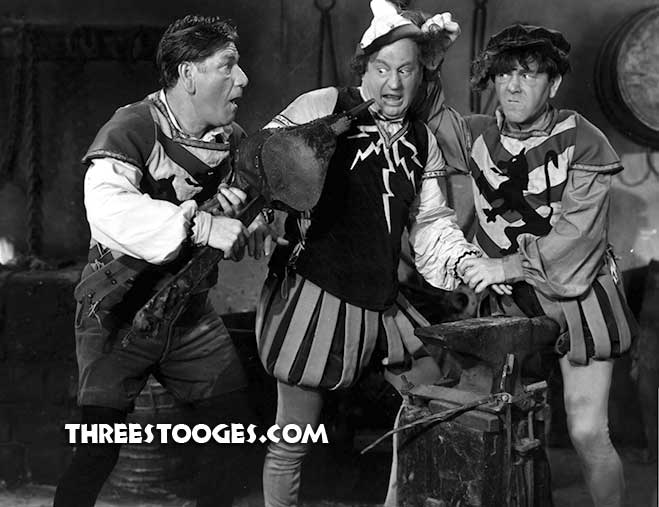 Short Take: Perhaps you have noticed that several of the May shorts were collaborations between Jukes White and Felix Adler. Both were a big part of The Boys body of work at Columbia with Adler’s first story 1934’s Men In Black to 1959’s Triple Crossed. Jules White directed, produced or both the majority of The Boys shorts starting with the first one, Woman Haters.

This short was a ‘box comedy’ as all the action takes place in one locale with the other players coming to The Boys. In this case, the police station where The Boys are detectives looking to solve the mystery of who killed Slug Magurk.

The short is mostly carried by the dialog and includes the most use of telephone dialog gags in any short. There are some visual gags, like banging into the file cabinets, but the emphasis here to keep the story moving is the dialog between The Boys and several suspects they interview, along with the already mentioned phone calls.

One of the phone gags: Shemp: “Release that guy that stole the eleven bottles of whiskey. I know he’s guilty, but the DA says we can’t make a case out of eleven bottles.”

The Boys often stretched reality a bit in their shorts. In this one, the pistol used by the real culprit as he shoots up the police station fires seventy shots without a reload!

Phil Arnold who played in several shorts had one of the all-time names for a character in this short: Gilbrave Q. Tiddlywadder. Maybe that’s why they called him Chopper! 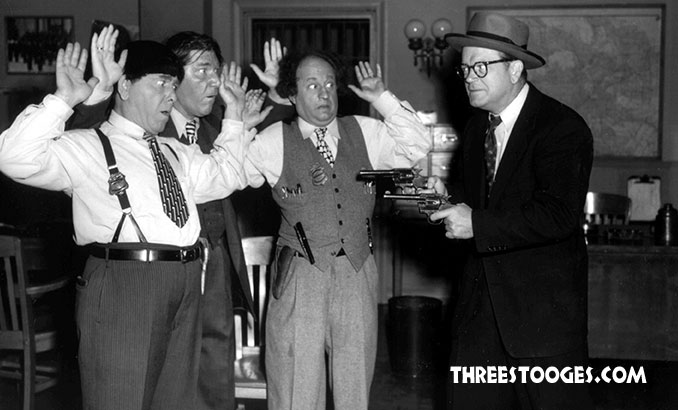 You may also enjoy: The Three Stooges May Short Takes Part 3