The Three Stooges had a busy May as you know if you read May Part 1 and 2 Short Takes installments. Here we will present the rest of the May film shorts that range 1936 to 1941. Just for fun, we’re presenting these in a different order: From 1941 and working backward to 1936. Just a bit of the Stooge approach: Doing things in a different manner than usual. Which is a running theme throughout their body of work: Taking a path to get the desired result that no one else but The Three Stooges would think of!

The remaining May shorts have The Boys working their slapstick magic as waiters, firemen, prospectors, dentists, window washers, plumbers and even as members of the nouveau riche thanks to winning a contest. They’re even disguised as children and ‘expert witnesses’.

“I can pull it blindfolded.”

Short Take: The Boys are window washers who, in ‘A coincidence’ as voiced by Curly, act as dentists for a very distressed patient. Somehow the results end up just fine, even though The Boys pull the wrong tooth, cement the patient’s mouth shut and even use dynamite as a dental tool!

They then morph into children as Mrs. Bullion – Lelah Tyler –  wants to adopt refugee children. Her husband happens to be the hapless dental patient!

“Oh boy, I can see it now. Me coming home from a hard day’s work. I whistle for the dog and my wife comes out.”

Short Take: This short contains a large mix of successful Stooge bits, gags, and setups: The damsel in distress, animals, tools, dynamite, treasure, singing & dancing and a wild chase scene, all in a Western setting. Of course, it is the talents of Larry, Moe & Curly that makes this all work.

The Boys are looking for treasure – gold – so they can rescue three lady co-workers from their crooked boss. Along the way we get an elevation of the hardness of Curly’s head with a close up of the dented pickax. We also get The Boys using dynamite – always an intriguing and, dare we say, an explosive comedic element. Yes…we dared! Nyuk! Nyuk! Nyuk!

There is also the great piece of dialog as The Boys think their burro was killed by the dynamite blast as Moe laments: ‘Poor Yorick. I knew him well’. This is from Shakespeare’s Hamlet. 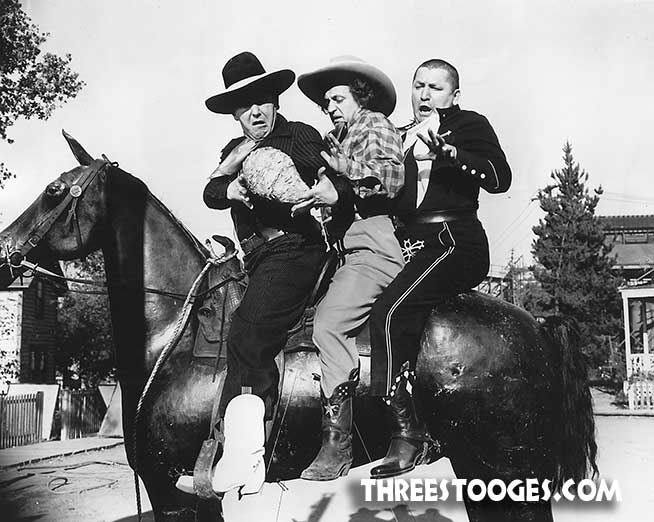 “Why didn’t you bring me a softer board.”

Short Take: This short can be summed up as easy come, easy go as The Boys become part of the nouveau riche with $50,000 in winnings from a radio contest.

We hear the name ‘Curly Howard’ on the radio in Healthy, Wealthy And Dumb. He wins $50,000 from a radio show so The Boys are off to the Hotel Costa Plente to celebrate. They rent the penthouse, don tuxedoes, smoke expensive cigars and drink champagne. Thanks to the hotel bill, the schemes of three gold diggers and then the IRS, they’re left with $4.85!

We get the first collapsing bunk bed and liquid poured out of a Stooge ear in this short. The dialog includes this gem: Moe telling Larry – after Moe smashes a priceless vase with a board – “You should have given me a softer board.” 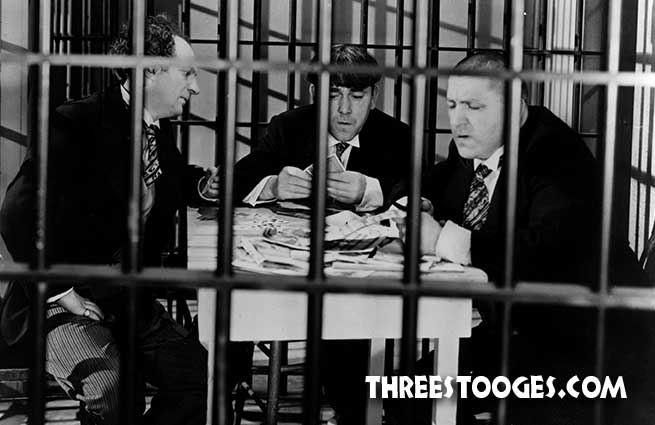 “Take off your hat!”

Cast & Crew: Larry, Moe & Curly. The supporting cast was one of the larger ones for a short. While all uncredited, the cast included many stalwarts including Susan Kaaren, Bud Jamison, Harry Semels, James C. Morton, Al Thompson and Eddie Laughton. Associate Producer: Jules White. Directed by Preston Black. Story and Screenplay by Felix Adler.

Short Take: Disorder In The Court is one of the most popular of all of The Three Stooges shorts. It contains many terrific scenes, bits, and gags, one following the other. These include Curly’s classic ‘Take Off Your Hat’ routine. Gail Tempest’s (played by Susan Kaaren) dance scene. Moe swallowing the harmonica and Larry & Curly ‘playing’ him like an instrument. Larry’s Tarzan yell. The parrot and of course, the exploding water hose.

Some of the dialog is phenomenal, like this exchange between Bud Jamison and Curly: Jamison: ‘Skip the vernacular’ Curly, pointing at his hat: That’s a doiby!’

Like every other month, May gave us a lot of laughs in the shorts from The Three Stooges – The Masters of Mirth, Merriment & Mayhem. We’ll see more when we present June’s Short Takes.  In case you can’t find a calendar, that would be next month! 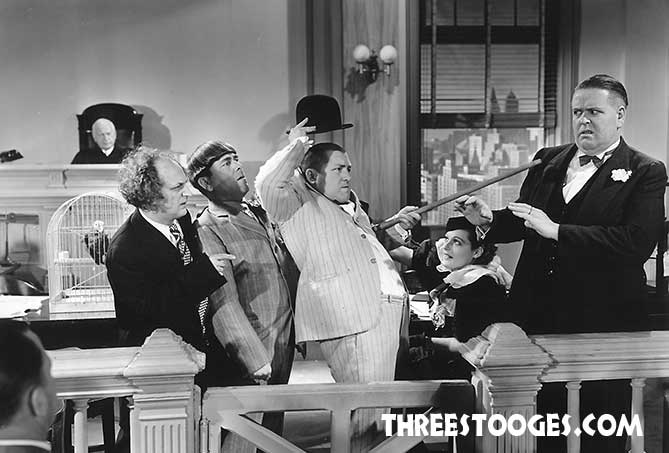 You can watch Disorder in the Court in its entirety on The Three Stooges YouTube Channel. Be sure and subscribe while you’re there!