The June Three Stooges film short releases span from 1936 to 1959 and include some great ladies in supporting roles including the often used three girl group, Christine McIntyre and a former Miss Sweden, Greta Thyssen. Even The Boys get into the act as they’re dressed as girls in Nutty But Nice. They also portray professors on an anthropological expedition, are out West, down South in a comical encounter in a bullring, and have some interesting social interactions with the upper classes. All this plus a pie fight and music from The Original Two-Man Quartet,

There is a very large supporting cast in one of the June shorts and there are some role reprisals from key supporting players.

Short Take: This is not a true remake but a recasting of I’m A Monkey’s Uncle. The newly written intro for Stone Age Romeos gives the film a modern and scientific perspective and then sends The Boys out on an anthropological expedition, taking them from locations on the map like Drinka Gin and Rigor Mortis to the shores of the Drop Dead Sea. This setup – the anthropological aspect – validates the caveman footage from I’m A Monkey’s Uncle and integrates well. The professors with beards and cavemen without beards creates a subtle comedic visual. The 35 seconds showing the map also brings a fun visual to the short, what with the crazy names. 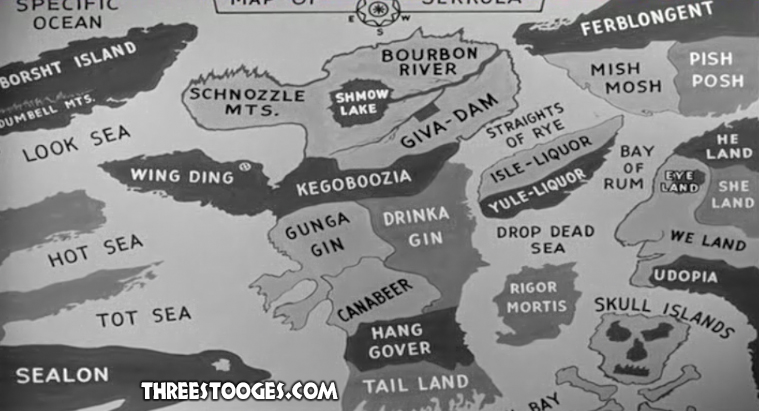 “You kleptomaniac!” “If that means what I think it does… I’m guilty.”

Short Take: Pies And Guys is a variant of Half-Wits Holiday, itself a variation of Hoi Polloi which was a parody of George Bernard Shaw’s play Pygmalion. We have two professors – Quackenbush & Sedlitz – and a big bet between hereditary versus environment as the key factor in changing The Boys into gentlemen. Of course, there will be a big society coming out party – with pastry –  when The Boys are ‘reformed’. Of course, we all know how that is going to end! Nyuk! Nyuk! Nyuk!

This area’s fine for hunting.” “How do you know?” “I saw a sign outside that said Fine For Hunting.”

Short Take: The film opens with a courtroom scene with Moe charged with Intent to Commit Mayhem! Now that’s a great setup for The Three Stooges! In this case, it derives from Moe’s aggravation with Larry and Joe who are too loud for his nerves so he does go after them, especially when they practice their music as the ‘Original Two-Man Quartet’! To calm Moe’s nerves, The Boys decide to go on a hunting trip and end up in the middle of a chase as the local sheriff pursues a crook. We get a cool line from Larry:  “This area is fine for hunting…I just saw a sign that said ‘Fine For Hunting’!”

This concludes the first round of The Three Stooges June Short Takes. We’ll do another installment soon as there a few more June shorts including a 3D short and a short with one of the largest casts ever used in a short.

You may also enjoy:

The Three Stooges May Short Takes