TV and film icon Adam West, who starred alongside The Three Stooges in the 1965 feature film “The Outlaws is Coming”, passed away last Friday, June 10th, after “a short but brave battle with leukemia,” his family said in a statement. West was 88.

Born William West Anderson in Walla Walla, Washington, he moved to Seattle at age 15 with his mother after his parents divorced. He graduated from Whitman College, a private liberal arts school, in Walla Walla. After serving in the Army, he went to Hollywood and changed his name to Adam West, and began appearing in television series, including Bonanza, Perry Mason, and Bewitched.

West is well remembered for his starring role in the 1960’s TV series Batman. A new generation of fans knew West as the voice of Mayor West on the long-running animated series Family Guy. West received a star on the Hollywood Walk of Fame in 2012.

Adam was a favorite of Three Stooges fans since his starring role as Bruce Cabot opposite Larry, Moe & Curly Joe in The Outlaws Is Coming.  He was a special guest at the 2016 Three Stooges Convention in Trevose, PA and a hit with all the fans in attendance.

Earl Benjamin, President & CEO of C3 Entertainment said “Adam was a long-time and valued member of The Three Stooges family. We will miss him and we extend our sincere condolences to his family, his friends and fans.”

Here’s a clip from The Outlaws is Coming. West plays Bruce Cabot, A Harvard-educated reluctant sheriff. Of course, West and The Three Stooges win the day.

UPROXX published a wonderfully detailed article about West’s work with The Three Stooges.

Before He Was Batman, Adam West Played The Straight Man In The Final Three Stooges Film 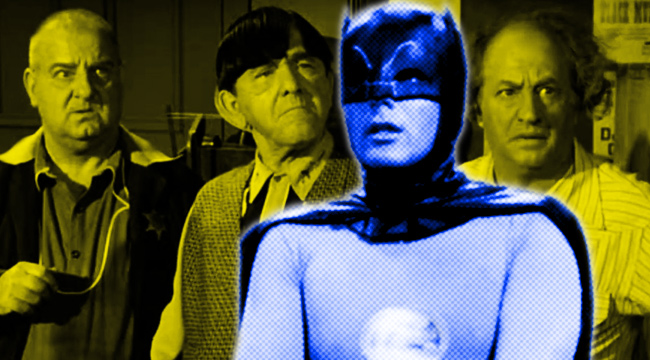 Since news of his death first broke June 10th, 2017, Adam West has been publicly memorialized by friends and fans alike for his career-making turn as wealthy orphan Bruce Wayne and his crimefighting alter ego, Batman. And while the ’60s Batman series stands out, so too does West’s voice work in modern TV stalwart Family Guy, in which he played a ludicrously funny version of himself who also happened to be mayor of Quahog, Rhode Island. “Family Guy has lost its mayor,” creator Seth MacFarlane tweeted on Saturday, “and I have lost a friend.”

As notable as West’s contributions to both bastions of popular culture are, however, few know of his pre-Batman television and film career, which consisted largely of Westerns. From playing the role of famous gunfight at the O.K. Corral participant Doc Holliday in three separate TV series, to appearances in Gunsmoke, Petticoat Junction and the movie Geronimo, the Walla Walla, Washington-born actor made his mark with a hat, a pair of boots and a smoking gun. Other projects, like a spot in the original The Outer Limits and a starring role in the cult classic Robinson Crusoe on Mars, helped bolster West’s profile along with the Westerns in his credits. Yet how did a classically handsome Hollywood leading man best known for such dramatic roles become most famous for his contributions to comedy? A crucial step in West’s rise was his team-up with a team with ties to vaudeville.

West’s pre-Batman roles include an appearance in 1965’s The Outlaws Is Coming!, the final theatrical feature film starring Moe Howard, Larry Fine and Joe DeRita as The Three Stooges. The trio would go on to voice their characters in the short-lived The New Three Stooges cartoon and the aborted TV pilot Kook’s Tour, but Outlaws marked their final feature outing — and West’s straight man cum would-be Western gunslinger, Kenneth Cabot played a crucial part as the team’s foil. West plays the editor of a Boston magazine concerned with a buffalo slaughter in Wyoming, Cabot and his three editorial associates embark on a farce not whose plot resembles later classics like Blazing Saddles and City Slickers.

“Boys, boys please,” Cabot exclaims in his first scene, “I’m working.” Having just finished the first of many characteristic fights meant for laughs, a newsprint-plastered Moe acknowledges his decidedly younger boss. “Oh that’s all right,” he quips, “you’re not bothering us Mr. Cabot.” It’s an otherwise typical, unsurprising scene from the Three Stooges’ filmography, but West’s presence as Cabot — a character whose straight man role immediately places him second to the star trio’s pedestal — seems odd. After all, this is the man who helped bring Batman, a comic book vigilante, into the ’60s mainstream with all the camp he could muster. And much like the caped crusader, Cabot here employs equal parts charm and intentional hilarity in a manner one would assume the good-looking West wouldn’t necessarily embody.

As West later told Filmmax magazine, his decision to transition from traditional Westerns to the slapstick, parodic fare made perfect sense. “I did that for several reasons, among them the fact that The Three Stooges were so incredibly popular in colleges and so on that it did nothing but expand my fan base,” he explained. People make fun of me sometimes — critics and the like — for all of these things, but I pretty much know where I’ve been heading.” He admitted his resulting success, which wasn’t based solely on his doing The Outlaws Is Coming, was “just a matter of luck” since “[there] are so many wonderful, talented people out there that never get anywhere.”

The film doesn’t shy away from including West’s Cabot in the Three Stooges’ typical antics — be it shooting his own hat off while handling a revolver for the first time or bumbling his way into becoming the sheriff of the otherwise lawless Casper, Wyoming. He remains Outlaws‘ straight man throughout, but still receives plenty of opportunities that preview what would become Batman‘s signature camp, the popularly “fun” style contemporary fans and initially skeptical critics would later embrace. Watching Cabot at times even feels like being in the audience of Bruce Wayne’s life before he became Batman.

While reminiscing about the experience with A&E’s Biography program, West noted his time with Moe, Larry and Curly Joe in front of and behind the camera played into this:

Our first meeting at the Columbia ranch, one morning quite early, and I went in to makeup and got on my Western duds and came out in the street. And I saw Larry Fine sitting in a chair and I think his wife was yelling at him about something. Actually, the guys were very serious off camera, their demeanors. They were very serious artists in their own way and I was surprised how quiet they were in respect to their screen personae.

At the same time, he added, they would do things like hosting a wrap party at Moe’s Bel-Air home, where the actor served everyone a “buffalo barbecue” to poke fun at Outlaws‘ save-the-buffalo plot. “That sort of typifies these three restless knights,” said West.

Sadly, the movie isn’t available to stream on any of the major platforms, but YouTube videos depicting The Outlaws Is Coming in parts are available to watch should fans want to check out West’s sojourn with a group of comedy legends. It may not be the best work the man who would be Batman and Quahog’s mayor did in his long career, but it definitely marks a turning point — one that would ultimately create the Adam West we all knew and loved so dearly.

READ THE ARTICLE ON UPROXX.