Things That Go Nyuk In The Night: Halloween With The Three Stooges

The Halloween season is the time to spook and delight with things that go nyuk in the night. The Boys have tricks and treats in store for us with these classic short films where they tangle with ghosts, goblins, gorillas, mummies, werewolves and other sorts of scary characters.

Dizzy Doctors (1937): The Stooges are lazy good-for-nothing husbands at home, inept salesman in the street, and misfit fugitives in a hospital. They land a job as salesmen selling a snake oil called “Brighto.” After harassing the citizens and even ruining a man’s auto paint job, they make their way into the Los Arms Hospital and try their hand at selling Brighto to the patients. They enter the Superintendant’s office to make a sale, but the Super is the same man whose car’s paint job was ruined. Maybe not so scary, but the scene where they hijack the Hospital PA system gives us a great bit with a trio of skulls.

Trivia: This is the first short where all three of The Boys are married. (That can be scary for some people.)

Three Missing Links (1938): The Stooges are janitors, cleaning up the office of movie producer B. O. Botswaddle. After botching up, they are fired. When Curly impersonates a chicken with its head cut off, Botswaddle hires him (and the other Stooges) for his new movie. The crew heads off to the jungle to film the picture, with Curly as a gorilla. But then, a real gorilla appears and confusion reigns.

Trivia: Some often used Stooge slapstick firsts: the nose bonks Moe delivers in the opening sequence, and two Stooges opening the door to a beast after the third stooge has knocked but runs away in fear.

We Want Our Mummy (1939): The Stooges are detectives hired by a museum curator to find the kidnapped Professor Tuttle and the mummy of King Rutentuten. The boys hail a taxi at the cost of $2,198.55 to Cairo. When they find the tomb, the boys encounter crooks who are also after the mummy. The mummy they thought was Rutentuten was really his wife, Queen HotsyTotsy. It turns out King Rutentuten was a dwarf.

Spook Louder (1943): The short opens with Prof. J. O. Dunkfeather telling a reporter how he solved a mysterious case. The scene fades to the Stooges, three door-to-door peddlers selling their “Miracle Reducing Machine.” After several rejections, they come across the home of Mr. Graves, a mad scientist who has invented a new death ray (“It’ll kill millions!”). Graves mistakes the Stooges for his new caretakers and leaves them to guard his home while he is in Washington. Three spies are out to steal Graves’ plans and disguise themselves in Halloween costumes to scare the Stooges away. Meanwhile, an unseen culprit roams the house, hurling pies at everyone.

Idle Roomers (1944): Bellhops at the Hotel Snazzy Plaza, Moe, Larry & Curly encounter the Leanders, husband & wife vaudeville performers who’ve smuggled their prize attraction into the hotel… Lupe the Wolf Man. The beast is tame unless it hears music, which makes him go berserk. Accidentally set loose when the Stooges clean the guests’ room, Curly tries to calm him with his trombone (“music hath charm”), sending the wolfman on a rampage with the boys as his target.

Trivia: The film marks the debut of Christine McIntyre who would go on to appear in nearly two dozen Stooge shorts.

If A Body Meets A Body (1945): Moe reads in the newspaper that Curly is the missing heir to his rich uncle Bob O. Link’s estate. The Stooges go to the mansion, only to find out that Prof. Bob O. Link didn’t die, he was murdered! And both his body and the will are missing. The boys have to spend the night in the spooky old haunted house and solve the mystery.

Trivia: The premiere of a new, slower rendition of “Three Blind Mice” as the Stooges’ theme music, arranged by John Leipold and Nico Grigor, which will be used into 1948.

A Bird in The Head (1946): Moe, Larry and Curly are three paperhangers who are out of a job after they wreck Mr. Beedle’s apartment, but Prof. Panzer offers to take care of them for the rest of their lives. He wants to transplant Curly’s brain into Igor, his gorilla!

Trivia: The film was shot April 9-13, 1945, but shooting was suspended on April 12 out of respect for the death of President Franklin D. Roosevelt.

The Ghost Talks (1949): The Stooges are moving men sent to a spooky old mansion on a rainy night to move some old furniture, including a suit of armor. The armor objects to leaving, however, as it is inhabited by the spirit of Peeping Tom the tailor, who was cursed when he saw Lady Godiva ride by centuries ago. Intent on moving Tom, the boys find themselves trapped in the house with animated skeletons and a flying skull.

Trivia: Two years earlier, writer, Felix Adler, and director, Jules White teamed on Sing a Song of Six Pants and All Gummed Up.

Trivia: Notable first – Moe mesmerizing Shemp and Larry by drawing his fists down and up in front of their faces and then giving them each a bonk.

Creeps (1956) – A remake with footage from The Ghost Talks. Telling their sons a bedtime story, the Stooges weave a tall tale of themselves as moving men sent to a spooky old mansion on a rainy night to move some old furniture, including a suit of armor. The armor objects to leaving, however, as it is inhabited by the spirit of Sir Tom. Vowing to kill the Stooges if they try to remove him, the boys are soon on the run from the sword-wielding Tom.

Trivia: The storytelling convention where the film begins and ends with The Boys as babies was added by Director, Jules White to add cohesion in the exposition which was lacking in the original version of The Ghost Talks.

You can also buy digital comic books like the new issue below on Comixology. 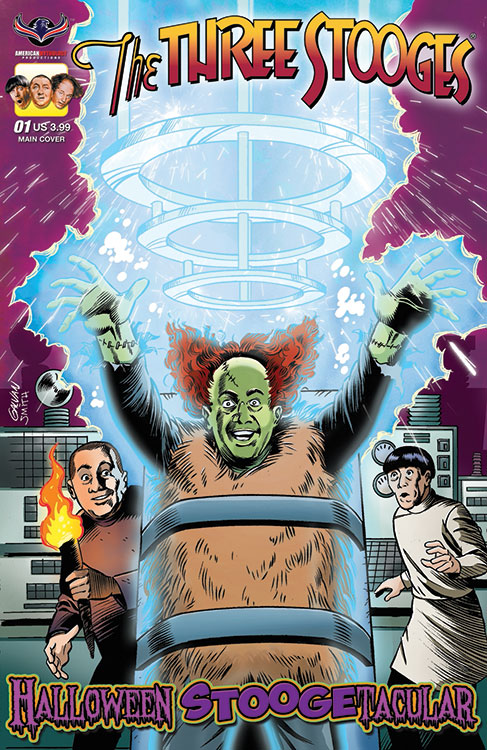 The Three Stooges Exhibit at Gepppi’s in Baltimore