The Three Stooges Big Box of Nyuks is coming!! 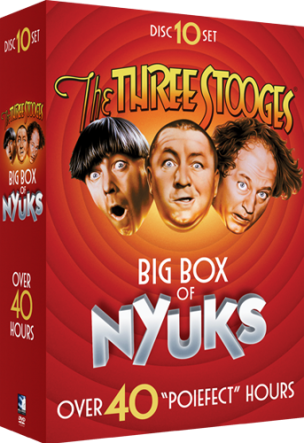 Big Box of Nyuks will be available at retail, online and ShopKnuckleheads.com beginning October 17, 2017. The Collection boasts 42 and half hours of Stooge material.

• The Three Stooges – The Complete Animated Series – THE NEW THREE STOOGES premiered in 1965 and featured animated cartoons with the voices of the Stooges – Larry, Moe and Curly Joe – as well as real footage ‘wraparounds’ of

the three comedy greats performing short skits to accompany the cartoons. Featuring all 156 cartoons, plus all 40 live-action sequences exactly as they originally aired.

• The Three Stooges – Hey Moe, Hey Dad! – The most expansive documentary ever done about the six men who comprised the iconic comedy team The Three Stooges. This prodigious achievement is narrated by Moe Howard’s son Paul and features his sister Joan Howard Maurer along with various other Stooge relatives. It offers us a touching, warm-hearted look back at the long history of this team with rare personal pictures, many never seen by the public before.

• The Three Stooges (TV Movie – 2000) – Based on the book “The Three Stooges: From Amalgamated Morons to American Icons,” this MOW dramatizes the rise of the comedy trio to worldwide fame. Starring Michael Chiklis, Paul Ben-Victor, John Kassir, Evan Handler.

“This is, without a doubt, the biggest, craziest, slap-stickiest collection of Stooge ‘toons, shorts, docs and feature films that has ever been made available together in one colossal DVD collection!, says Barrett Evans, VP of Marketing, Mill Creek.

Mill Creek Entertainment is the industry’s leading provider of value-priced DVD and Blu-ray features and compilations. Our television, movie, kids and special interest compilations have reset the bar for consumer value and gained massive adoption by traditional and non-traditional retailers alike. http://www.millcreekent.com/

The Three Stooges® is a registered trademark of C3 Entertainment, Inc.

The Three Stooges characters, names and all related indicia are trademarks of C3 Entertainment, Inc.

Where To Buy Wise Guy Root Beer from Rocket Fizz!