Memorial Day began as a remembrance of those who had served and died in the Civil War.

It was originally known as Decoration Day as the graves of the fallen were decorated. This practice and other remembrances occurred all through the Nation, North and South, in the late 1860’s.

Many cities claim to be the original site of the first Memorial Day. Waterloo, New York became officially recognized in 1966 through a decree by President Lyndon Johnson.

Today, Memorial Day is celebrated the last Monday in May, and the official celebration takes place at Arlington National Cemetery in Washington, D.C., with the President giving a speech and laying a wreath at the Tomb of the Unknown Soldier.

Memorial Day is, of course, celebrated throughout the country with local ceremonies, parades, and other activities to honor those who have given their ‘last full measure’ for our country.

So we ask that during this Memorial Day weekend, which kicks off the Summer with backyard barbecues and the Indy 500, to take a moment and remember those who have fallen in service and also to honor the men and women currently serving our country. 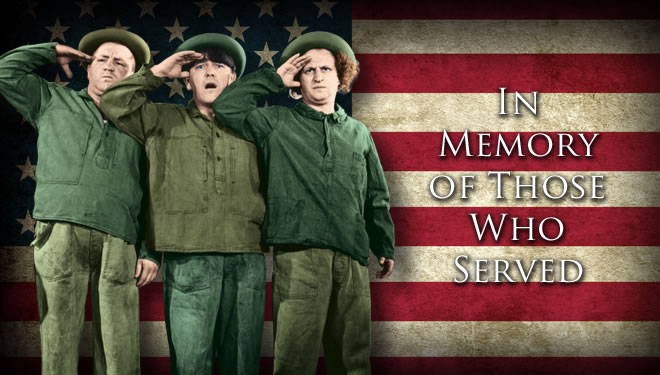 The Three Stooges have always been in the American mainstream and their 85+ year history of popularity attests to their staying power and to the very high recognition they enjoy. Throughout their careers, with their body of film work and as live performers, The Three Stooges were always visible. This continued after they all left us with their body of work still available to view and as their images are constantly used by the media, advertisers and throughout the entertainment industry.

The Three Stooges also have a history with the United States Military; a history that is much more than just portraying soldiers or sailors in their shorts. Given their ages, they were a little too young for service in World War I and a little too old for World War II.

That didn’t stop The Boys from serving, however. Larry, Moe and Curly performed and toured with USO shows throughout World War II. They went wherever and whenever they were asked and brought their unique talents and the respite of laughter to our men and women serving in uniform in all branches of the service.

Curly Joe DeRita also toured extensively with the USO during WW II, performing throughout the South Pacific and appearing with Bing Crosby in England and France.

Besides the USO shows, The Boys were involved in some of the most successful War Bond drives throughout World War II. They were big draws and these efforts on the home front helped raise millions for the war effort. So The Three Stooges, as with most of the entertainers of the day, did their bit, some in uniform, like Clark Gable, and some as civilians, like The Three Stooges, providing needed entertainment and boosts to morale for our Soldiers, Sailors, Airmen, and Marines.

Today we honor our fallen heroes of military service and thank our men and women in uniform, wherever you are serving, we hope you are home soon safely.

For more information about the USO, which continues to provide much-needed services to our men and women in uniform, please visit their website at www.uso.com.

Fitness With The Three Stooges Is A Laughing Matter!