To see how Larry, Moe and Curly dealt with Mother’s Day, check out the short All The World’s A Stooge from 1941 when Mrs. Bullion wants to adopt war refugees and ends up with The Three Stooges. There’s some great social satire in this short and the guys dressed as children is a stunning visual. 1942’s Sock A Bye Baby gives somewhat of a different spin on this theme as Larry, Moe and Curly have to take care of an abandoned baby. We get to see what is so easy for any Mom become so difficult for The Three Stooges!

The classic Stooge routine, “Tell me your name so I can tell your mother,” was used in three of their film shorts: Oily to Bed, Oily to Rise, Movie Maniacs, and Cuckoo on the Choo Choo.

Here’s some information about Mother’s Day that we thought was interesting and we hope you do, too. Mother’s Day celebrations can be traced all the way back to ancient Greece and the Roman Empire. A somewhat more contemporary ancestor would be England’s ‘Mothering Sunday’ which was celebrated on the fourth Sunday of Lent. During the 1600’s, young men and women who were servants and apprentices would return home on Mothering Sunday and bring their Mothers gifts and cakes. 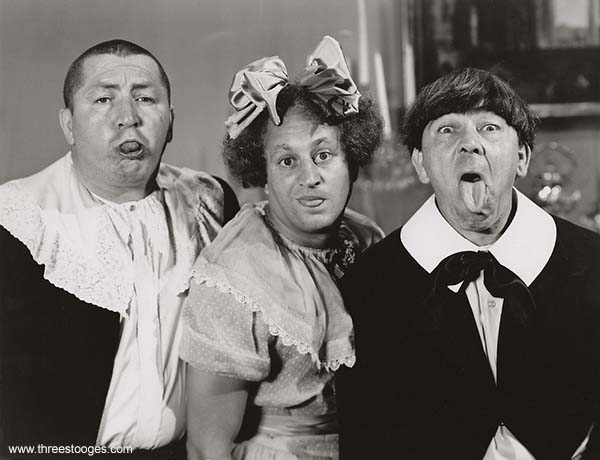 Curly, Larry, and Moe try to make a good impression on their new Mother in “All The World’s A Stooge.”

The first Mother’s Day in the United States was celebrated in Grafton, West Virginia, and in Philadelphia, Pennsylvania, on May 10, 1908. Anne M. Jarvis is credited with beginning the Mother’s Day tradition in our country as the 1908 events came about after her two-year letter-writing campaign to gain the support of influential ministers, businessmen, and congressmen in declaring a national Mother’s Day holiday.

The House of Representatives in May 1913, unanimously adopted a resolution requesting the President, his Cabinet, members of Congress, and all officials of the federal government to wear a white carnation on Mother’s Day. Congress passed another Joint Resolution May 8, 1914, designating the second Sunday in May as Mother’s Day. The U.S. flag is to be displayed on government buildings and at people’s homes “as a public expression of our love and reverence for the mothers of our country.” President Woodrow Wilson issued the first proclamation making Mother’s Day an official national holiday.

WATCH THE FULL VERSION OF ALL THE WORLD’S A STOOGE
UNTIL MONDAY APRIL 14, 2018