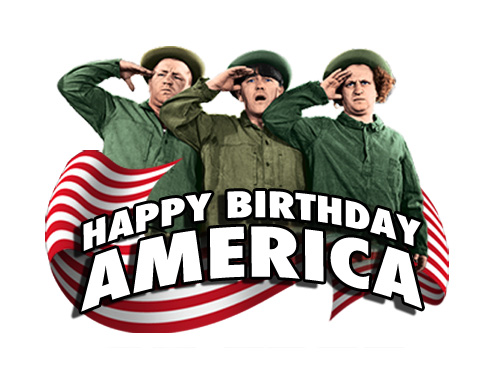 July 4th will always be remembered and celebrated as Independence Day. There are some other interesting happenings on that date in history, including some births worth mentioning and some notable Three Stooges events. Among those born on the Fourth of July:

• Author Nathaniel Hawthorne (1804). Among his works: “House of Seven Gables” and “The Scarlet Letter.”

While the adoption of The Declaration of Independence is the big news of the day, here are some other notable happenings that occurred on July 4th:

• Construction on the Erie Canal begins in 1817.

• Statue of Liberty presented to the United States in Paris in 1884.

The Three Stooges also have notable some 4th of July events:

• Three Loan Wolves with Larry, Moe and Curly released in 1946. This was supporting player Harold Brauer’s first appearance with The Boys and he, along with Emil Sitka, was the only supporting cast member to work with all four iterations of The Three Stooges.

• Gents In A Jam with Larry, Moe and Shemp released in 1952. This was the last Stooges short for producer Hugh McCollum and writer/director Edward Bernds.

We hope you all celebrate our nation’s birthday with family & friends to enjoy the fireworks and festivities that will take place in every city and town across the country!

Which Stooge Are You? Take The Quiz Now