A Three Pattern with a Twist! 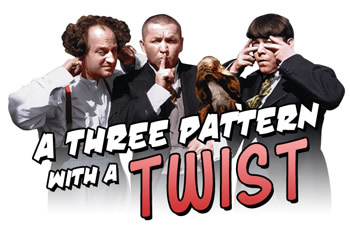 The Three Stooges are famous for their fantastic use of three pattern dialogue. Here’s a real good one from 1940’s ‘No Census, No Feeling’. The set up: The Boys, as census takers, approach a pretty girl:

Press, Press, Pull is at the very far edge of a three pattern, as is Yes!, Yes!Yes!, No! which The Boys used several times in their shorts and movies.

Our ‘Three Pattern With A Twist’ is just a hook to get you here so we can talk about questions! Like…Do we get questions? Soitenly!

So now we’ll give you the answer to three questions. See a pattern here? Nyuk, Nyuk, Nyuk!

Answer (A): This is from the short ‘All The World’s A Stooge’. This short, released in May 1941, saw Larry, Moe and Curly wreck havoc in the dentist’s office and at the home of Mr. & Mrs. Bullion, who wanted to adopt them as refugee children. That’s where Curly did his famous Jolson impression.

Q: What is the name of The Three Stooge theme song?

A: Actually, there are two theme songs: Listen to the Mockingbird and Three Blind Mice. Most fans are familiar with the Three Blind Mice theme as it is used extensively in the opening and closing credits of the shorts, albeit with a jazzy arrangement.

Q: Which short has the characters ‘Dewey, Cheatem & Howe’?

A: While long a part of Stooge lore, these attorneys at law are truly fictitious, at least in the world of The Three Stooges and their films. The famous poster with Larry, Moe and Curley as Dewey, Cheatem & Howe was created only as a publicity item as The Boys never portrayed these characters. Also, there is no office door in any short with the Dewey, Cheatem and Howe moniker. The closest reference was the character I. Cheatham in the 1945 short ‘Three Pests In A Mess’.

So now you have some answers to go along with some questions, which go together like, well…Eggs and Hammy! Oh Mammy!